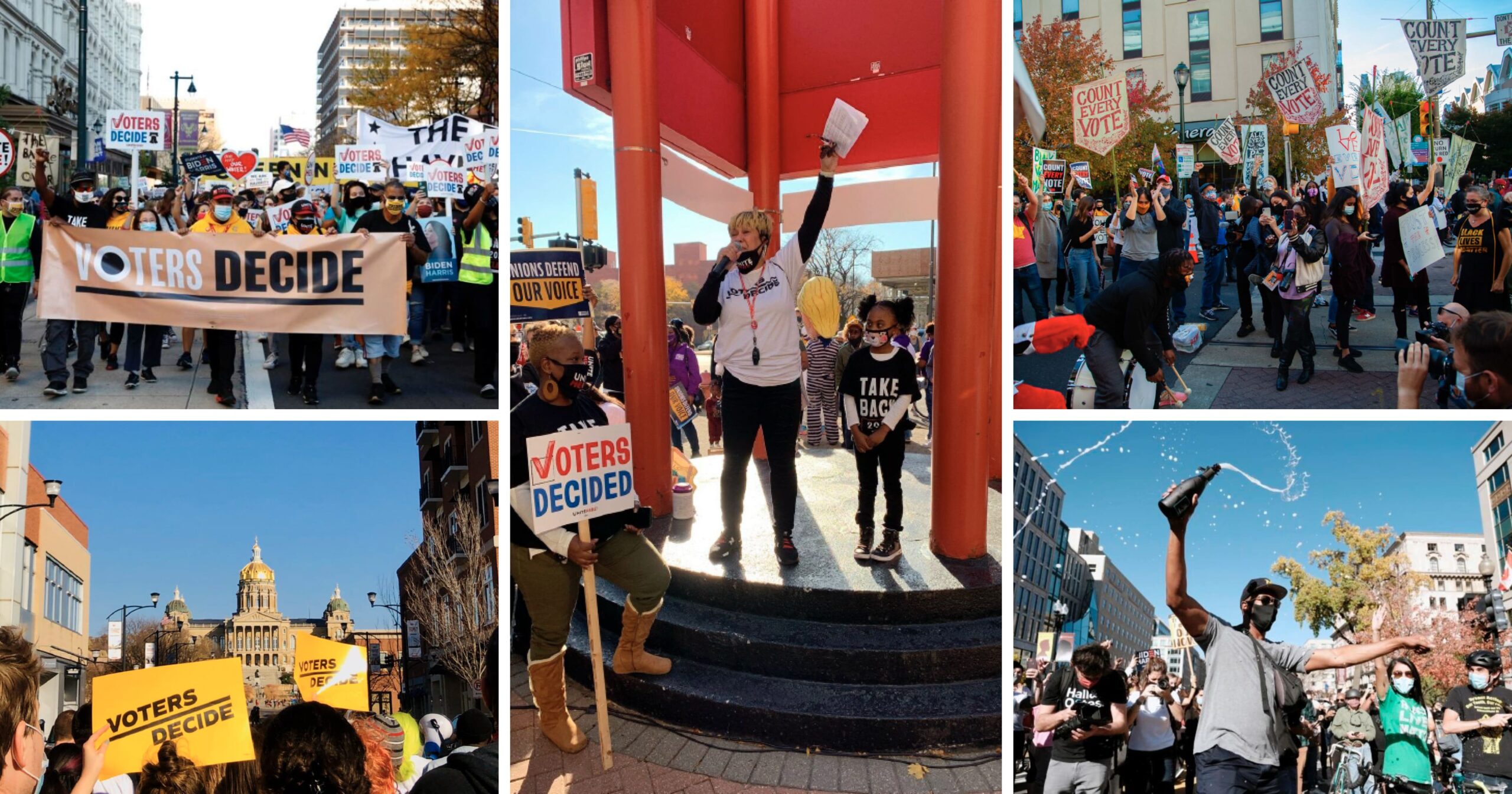 While lawyers battled frivolous suits, advocates recruited poll workers, and organizers thwarted efforts to toss out ballots, a far less visible effort was also underway. Armed with nightly empirical testing, messaging experts and artists provided narrative guidance and visual content to support countless leaders across states to ensure the will of the people did, indeed, prevail.

Advocates for voting rights, racial justice and electoral reform recognized early on that 2020 would be an election like no other – even before any of us even knew the dreaded phrase COVID-19. For the first time, a sitting president not only spoke about refusing to accept electoral defeat and transfer power as every one of his predecessors had, his administration took concrete steps to attempt to sabotage the election.

While scholars of authoritarian regimes rightly decried these efforts as an attempted coup, messaging experts considered how to narrate this new reality to the broader public with strategic goals in mind. First, was the need to reassure voters that a slower outcome was not only to be expected, it was to be welcomed in order to provide trusted administrators time to properly do their jobs. Equally important, progressives needed a way to galvanize an exhausted, pandemic-scarred public to demand that in America, voters pick our leaders, our leaders do not pick which voters to heed and which to silence.

From social media images shared over a billion times to daily messaging guidance shared across the progressive movement, learn how communicators framed the unprecedented post-election events to ensure that the leaders the majority of us elected were sworn in to govern in our name.

Dr. Jiggy Geronimo is the Executive Director of a progressive research and messaging collaborative with experience in voting rights, state legislative advocacy, coalition building, and grassroots organizing. In her current role, she supports the progressive movement with research, messaging, and collaborative alignment in order to facilitate the creation and spread of winning narratives.

Jiggy was previously the Senior Director of National Programs at Voting Rights Lab where she led rapid-response programming, messaging research, and state campaigns in 10 states, including supporting the successful legislative and ballot initiative campaign to expand voting rights to 50,000 Californians returning home from prison. Prior to that, Jiggy was the Senior State Policy Manager at Indivisible where she built Indivisible’s grassroots state advocacy program from the ground up.

Prior to a career in politics, Jiggy earned her PhD in neuroscience at UC San Francisco studying the role of the neurotransmitter serotonin on inhibitory neurons on the brain and taught undergraduate biology courses at the University of San Francisco; she brings her research expertise, scientific rigor, and understanding of the mind to her work in politics.

Jiggy enjoys cooking, hiking in the mountains, and watching the waves crash at the beach. She lives with her husband and dog in Pacifica, CA.

Simon Isaacs is CEO of TaskForce. Simon has spent his career scaling businesses at the intersection of marketing and social impact with multiple successful acquisitions. As the CEO of TaskForce, Simon has grown the Company 6x since 2018 and led its digital efforts including The Into Action Lab, the political content machine and memetic warfare operation with over 110 billion organic views in 2020-2021.

Prior to TaskForce, Simon founded and led Fatherly, a digital parenting media site (acquired 2019). Through Fatherly, Simon was recognized by Oprah as one of the top 100 most inspiring leaders. Simon also won multiple Webby Awards, Digiday Awards and was nominated for a Peabody for his podcast, Finding Fred.

Prior to founding Fatherly, Simon dedicated the past 15+ years spearheading cause-related marketing efforts for nonprofits, foundations, and corporations including The Bill & Melinda Gates Foundation, The Coca-Cola Company, the Clinton Foundation, the United Nations Foundation, and more. Simon has launched more than a dozen national and international campaigns and raised more than $250 million toward philanthropic causes.  Simon was recognized by the Obama White House as a Next Generation Lead for his work in social impact.Simon is a former professional marathon runner. In 2007, Simon ran on foot around the world as part of the Blue Planet Run. Simon lives in Brooklyn, New York with his 2 children.

Tyler Lewis is managing director of communications for Third Sector Capital Partners, a nonprofit organization that uses public funding and data as levers to impact how governments, providers, and their partners work with and improve the lives of the people they serve.

Before joining The Leadership Conference and The Education Fund, Lewis worked in communications at Pre-K Now, a public education and advocacy organization advancing high-quality, voluntary pre-kindergarten for all.

Lewis is vice chair of Ngoma Center for Dance, a Washington, DC-based 501(c)3 arts organization whose mission is to provide a conduit between multicultural dance artists and their enthusiasts across generations and social classes. He is also a 2019 Global Messaging Program fellow, a prestigious rigorous program designed to equip progressive leaders with the tools to develop more effective campaign messaging.

Lewis has a Bachelor of Arts degree in Creative Writing from Carnegie Mellon University.