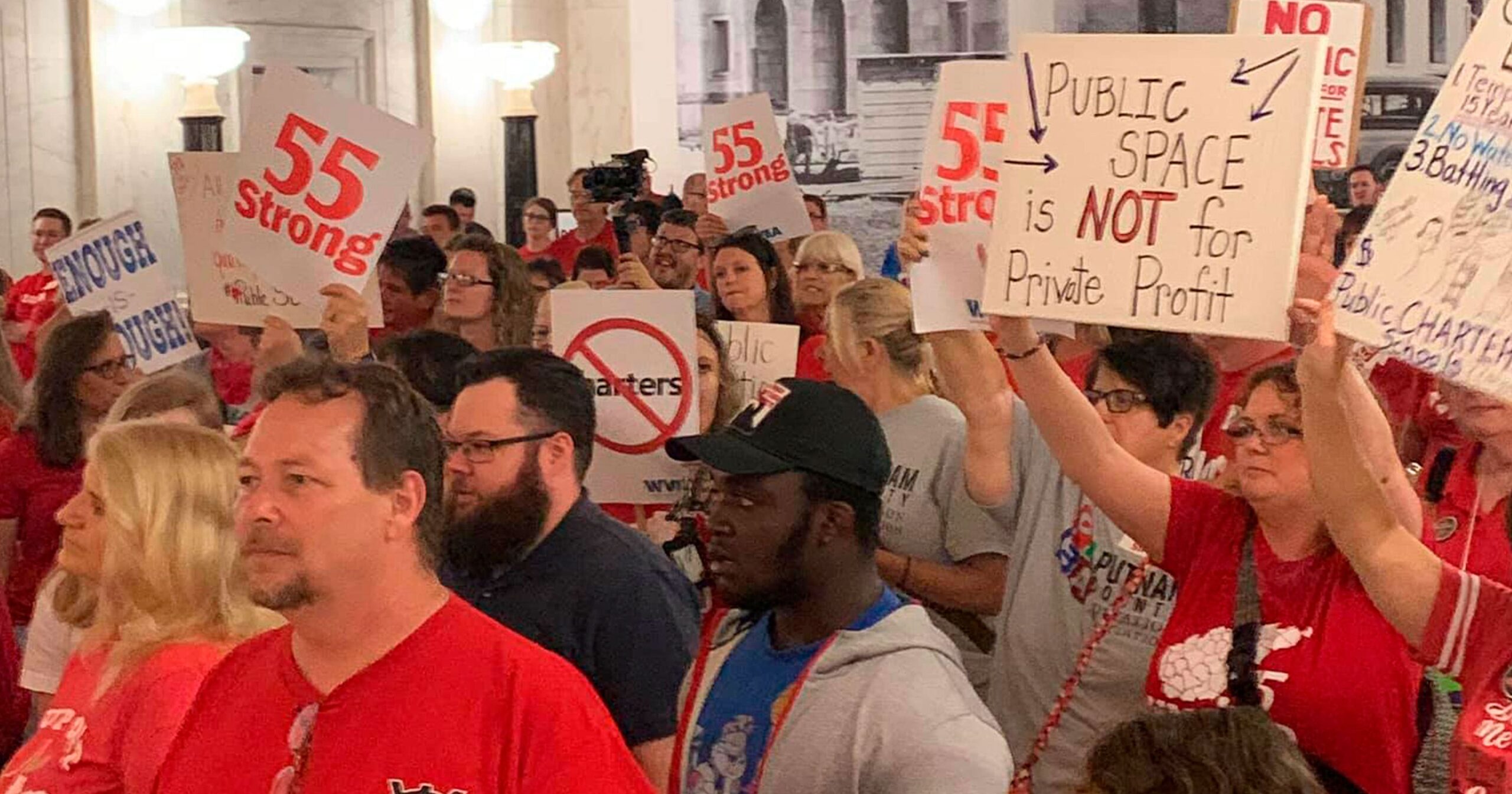 Coming December 7th: From 55 United to Red for Ed: Striking for Public Education

Coming December 7th:
From 55 United to Red for Ed: Striking for Public Education

As we witness today’s rightwing attacks on our public schools, we consider what the 2018 educator strikes can teach us about formulating an effective response. This movement to secure better healthcare, classroom funding, and more equitable pay ignited in states you might not expect: West Virginia, Oklahoma and Arizona. And from there, it took off and delivered wins across the nation.

After years of stagnant wages at some of the lowest rates in the nation, educators in West Virginia were facing ballooning healthcare costs and paltry coverage. And in 2018, they decided to teach the ultimate lesson in standing up for yourself by standing together in union. With unprecedented parental and political support, teachers, support professionals, bus drivers and service personnel went on strike in a state where it was outlawed.

Their efforts and achievements inspired colleagues in Oklahoma and then Arizona. In the Grand Canyon state, the online organizing and agitation of newer teachers spurred union leadership to action. Educators there protested in the Phoenix heat for eight days, until they won greater funding for the good of everyone from students, to teachers, to support professionals.

From the DIY ingenuity infused into signs to the multi-layered meaning of wearing red, educators sent a clear signal of the power and purpose of public education. Ultimately, the strikes demonstrated that our loudest message is conveyed in our actions. We explore what it took to ignite and sustain this movement, and what lessons learned then apply to combatting today’s right wing assault on teaching the truth of our history.

Fred Albert was elected as an AFT Vice-President during the 2020 AFT National Convention.

Albert has served as president of AFT-West Virginia since November 10, 2018.

A 29-year veteran of the teaching profession, he taught math at DuPont Middle School in Kanawha County for 20 years before being elected president of the state federation.

He is a vice-president of the WV AFL-CIO, member of the Kanawha Valley Labor Council, serves on the Board of Directors for Reconnecting McDowell, and is a member of AFT’s State Federation Presidents Council. He also serves on the AFT’s Climate Change Committee.

Outside the classroom, Albert is very active in his church, as a member of the choir and as chairman of the administrative board of his church.

Marisol is the first woman of color to serve as AEA Vice President and the first Chicana. Marisol is not new to leadership, having served on the AEA Board of Directors, chairing statewide committees, and co-founding the AEA Latino Outreach Cadre. She also currently leads the Arizona Education Association’s Task Force for a New Vision for Arizona Schools, whose mission is to develop a vision for supporting successful public schools post COVID-19.

As a veteran middle-school social studies teacher in the Isaac School District, she is committed to her students. Most of her students are immigrants or children of immigrants who are second language learners living in an underserved community. She works tirelessly to make sure they see their school as their second home — ensuring they are safe, engaged in their learning, and empowered to find their voice in their community. As the former local president of the Isaac District Education Association, she developed the association’s reputation as a strong voice and advocate for students and teachers throughout the community.

Marisol comes from a family of educators; both her parents are accomplished authors and educators who have worked in public education for over 40 years. She is the proud mother of her fifteen-year-old son, Vicente.

Marisol earned her BA in Political Science from the University of California at San Diego and a teaching credential from San Francisco State University.